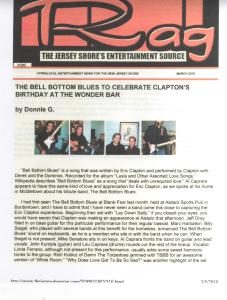 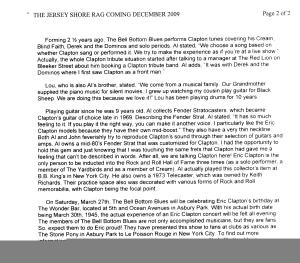 … I had first seen The Bell Bottom Blues at Blank-fest last month … and I had to admit that I have never seen a band come this close to capturing the Eric Clapton experience. If you had closed your eyes you would have sworn that Eric Clapton was making an appearance … 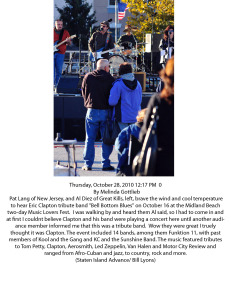 … “I was walking by and heard them”, Al said, “so I had to come in and at first I couldnt believe Clapton and his band were playing a concert here until another audience member informed me that this was a tribute band.”

The Bell Bottom Blues Play the Blender Theater in N.Y.

A Great Review from Lee Dickson 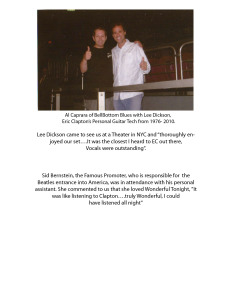 Lee Dickson, Eric Clapton’s personal guitar technician saw The Bell Bottom Blues perform at the Blender Theater in New York City, and had this to say: “… thoroughly enjoyed the set … It was the closest thing to EC out there. The vocals were outstanding”

…It was a terrific night on Saturday!  Bell Bottom Blues was so nice and a lot of fun to work with.  They put on a great show and the audience loved it. Can’t wait to have them back.” David LeBlanc, Program Event Manager, Strathmore Hall Foundation, Inc.

…The Bell Bottom Blues was a fantastic group!  They were professional to work with, modest, and a clean and clear sound on stage.  Corey Groll / Program Director Rehoboth Beach Bandstand

…The Bell Bottom Blues is an awesome band with great vocals and tight musicians.   If you like Clapton they are a MUST see! Michael L. Sceurman, CPSI Director of Recreation Bloomfield Recreation Department

… “The Bell Bottom Blues band rocked our Jazz on the River Series and were the most popular band in our 2 years of running this event.”~ Frank Pagano Point Pleasant Arts and Cultural Committee

… “The Bell Bottom Blues were fantastic! Such a great tribute to Eric Clapton! They did his music justice. We look forward to having them again.” ~ Barbara Califano-Badler Coordinator of Cultural Arts Town of Hempstead

… “The electrifying performance of the Bell Bottom Blues at the Marlboro Township Independence Day Concert was as colorful and entertaining as the fireworks display that capped off the evening.” Our residents and guests were asking for more! ~ Jane Gursky, Chairperson The Marlboro Township Recreation & Parks Commission